Two and a half years ago I could have been eaten by a bear. Here's the story.

For the last six years, excluding 2011, I worked in Northern Canada as, what some might describe, a bush pilot. It was definitely an interesting time, and I have had experiences and seen things most people on this planet can only imagine.  I've seen northern lights so big and bright they fill the sky and light up the night.  I've seen the world's most northern active sand dunes.  I've seen clouds of black flies that block out the sun. I've seen lake trout and walleye bigger than a kindergardener. I've seen marmots, beavers, caribou, foxes, wolves, ptarmigans, greyling, and bears. I've discovered waterfalls and named previously unknown islands.


One spring day I had a charter to Charlotte River. Charlotte River is located just west of Uranium City on the northern shores of Lake Athabasca. It is a private runway used by a power generation company to have access to three hydro-electric dams they operate which power most of northern Saskatchewan. My co-pilot and I were to hold there for an hour while our passengers performed some maintenance and we would be on our way.

The terrain in this area is quite varied and presents a lot of opportunities for exploring and picture taking. On the south side of the lake are the Athabasca Sand Dunes. They are Canada's largest desert. To the north is the Canadian Shield, covered with waterfalls, rivers, lakes, cliffs and forests. This particular runway ran parallel to a river emptying into Lake Athabasca, in a valley nestled between some very steep hills. Next to the runway was a thick row of trees, and next to the trees was a single dirt road which ran upstream to the dams.

Seeing as we had an hour to kill, my co-pilot and I decided to wander up the road and see what we could see. When our passengers where ready to leave they would have to drive back down that lone road and we could catch a ride with them back to the plane. As we started to walk around the bend in the road, hidden by the trees, my co-pilot remembered he had his camera on him and had never taken any pictures of the lake. Instead of walking down the road he wanted to go back to the shore and take some pictures. We turned around and went in the other direction. I took a picture of him in front of our plane with the bay in the background. Then we went down to the shore and poked around for a bit. A short time later our passengers returned. They asked us if we saw the bears on the road. We were a bit surprised at their question. Apparently just around the bend, behind the row of trees, was a mother bear and her two cubs. Now, I'm no Dwight Schrute, but I know enough to avoid a mother bear when she has cubs in tow. These bears were hanging around, just on the other side of the trees from us all morning, and we were blissfully unaware. As we taxied down the gravel runway, sure enough, the bears emerged from the trees and watched us from the edge of the tree line as we flew away.

If it hadn't been for my co-pilot's camera and his desire to take some pictures of the lake there's a very good chance we would have run into the bears on the road, and who knows what may have happened then. Here's the picture that just may have saved my life. 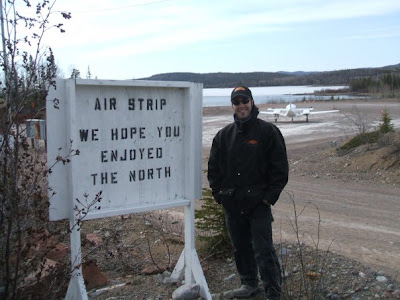 Email ThisBlogThis!Share to TwitterShare to FacebookShare to Pinterest
Labels: Fluff

I have a  lot of thoughts on Christmas.

This is just one of them.

I have decided to do something for Christmas that is a little unusual.

I am not buying any presents for anyone.

I didn't think my decision would be so shocking, but as I shared my decision with different people, I realized that it is difficult for some to comprehend a presentless Christmas. Their reactions have intrigued me.

Of the people in my life that tradition would dictate I should buy for, no one needs anything.  Most of the presents given at Christmas time are not really needed.  They end up at next year's garage sale, or in storage somewhere.

Of the actual useful items that could be given, the recipient probably doesn't actually want it, or they would have bought it for themselves already.

The idea of giving to charity in lieu of presents is probably closer to the true meaning of Christmas. I do give to charities as much as I can, both time and money, but not because it's Christmas.  For me, giving happens all year round.

Of all my memories of Christmas presents growing up, only one still stands out to me. (My nintendo when I was 9.)  Most I can't even remember. And of the ones I do remember, most were not really needed or wanted, and ceased to be used shortly after Christmas. I don't want to contribute to the commercialization and materialism that Christmas is known for. The things I do remember are the people, not the things.

So here's to you, readers, hoping you have memorable people hanging around you this season.

Here's what I'm working on:

Thoughts on Prayer
What does God want from me?
The time I was almost eaten by a bear
The one thing I'm most uncomfortable talking about

See you shortly.  I just need to get a few things done before I run out of time.