It's Christmas time.  The news just told me the average person in North America will spend $600 on Christmas presents this year. That is actually down 8% from last year. Considering the fact that I'm paying ZERO for Christmas presents, someone out there is buying $1200 to compensate for my lack of Christmas "spirit". 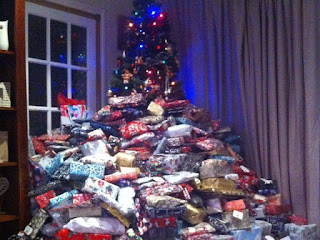 TVs aside, everything we own has a similar affect on us. There's a point at which accumulating more does not bring happiness. I think we're beyond that point in North America. There's a very interesting contrast happening in my life right now. I am actively working at reducing the amount of stuff cluttering my life, all the while people around me are actively shopping for more things because its Christmas. I've been giving away a lot of clothes lately. It's ridiculous how much I've accumulated, and I'm actively trying to reduce my consumption.  I have about 20 pairs of shoes. How does that even happen?

In one of my multiple homes I have a room to store my shelves that hold my boxes that house my things. Those things are rarely, if ever, used. I have 3 sombreros. I know Mexicans who don't own 3 sombreros.


It's my favourite time of the year. The shortest day of the year. Once again, every day for the next 6 months is going to be a little longer, a little brighter, than the day before. We made it.
Posted by Clinton at 12:01 PM No comments:

Discomfort Can Lead To Growth 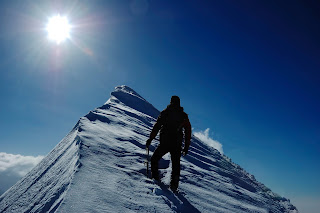 This blog has documented the changes I've gone through over the last 7 years or so. I've grown quite a bit as a person. My world view, how I perceive others, and how I perceive myself has changed drastically. Its been quite interesting to look back at who I was and where I've come from and compare that version of me to who I am now. I think the changes are good. Great even. What I've concluded is that comfort leads to stagnation and deterioration. The best comfort can lead to is the status quo. However, the negative end of the comfort spectrum ends with death of the soul, if not the body.

Growth only comes through the discomfort of trials. When I first started this blog I was deeply dissatisfied with my personal development. I suffered from Social Anxiety, I was incredibly shy and I was/still am an introvert. These obstacles left with me with only 2 options. The first option was to accept this disabling fear and live with it. I could seek out a life of comfort, which would have meant essentially living as a hermit. No friends. No social activities. No interaction with the world outside the necessities of life. I could avoid my fears and live a comfortably pathetic life. The second option  was to do whatever it took to overcome these obstacles in my life. It was very uncomfortable confronting my fears and putting in the necessary effort to grow beyond my limitations at the time. However, now that I am on the other side I can say with certitude that any discomfort I felt at the time is more than compensated for by the place I am in now.

It frustrates me to see people limiting themselves, seeking out immediate relief from discomfort instead of allowing that discomfort to lead to growth. The guy who climbs a mountain doesn't give up and go home because it got cold out. He puts on another layer and keeps climbing. The band that releases a hit song likely had a lot of flops that preceded it. The lady that loses 100 pounds didn't retreat to the kitchen with a spoon and a bucket of ice cream. It took self control and many uncomfortable trips to the gym. These are all real people I know. They could have retreated to a warm home, a boring profession, or a bakery and found comfort but they didn't. They persevered through their discomfort and changed their circumstances.

There's always two options. Retreat or press on. One is much more comfortable. The other leads to victory. The choice is always yours.
Posted by Clinton at 4:05 PM No comments:

I had to go to a couple stores and a mall this weekend. It was horrible. Parking lots without parking spots, malls with bouncers, stores with every till open and line ups stretching for all eternity. I hate materialism. And Christmas brings out the worst of those who writhe in materialism like a pig in slop. Every year the news covers the latest Black Friday stampedes, shootings, fights and deaths as people struggle to buy more junk they can't afford to give to those who don't need it and people they are mostly indifferent about.

I rarely buy Christmas presents. And if I do buy something, it usually has nothing to do with Christmas at all. The timing is just a coincidence. However, I'm a fairly generous person with my time, money and possessions. I try to help out where I can regardless of the time of year.

Several days ago at work some of the office staff were talking about what they were buying their kids for Christmas and how they hope to be done Christmas shopping weeks before the actual date. I casually mentioned that I don't buy anyone anything for Christmas. Their reactions were amazing. Some had looks of sheer horror, as though I just kicked their dogs. Others thought I was lying. Others still tried to coax the "truth" out of me, suggesting what I meant was that I only buy presents for my immediate family or something that fit within their paradigm. I said it again. Nothing. No one. Silence. So I continued to talk. I told them that I don't want to waste money that could go towards something positive and/or practical on things that no one wants or needs just because every one else is doing it. A couple people quietly admitted that it made sense. They were also the same people talking about all the toys they were buying for their kids. Then someone quite seriously said, "But you're still buying something for your wife, right?" Nope. More silence. Aghast looks on their faces. It made my day. I hope some were shocked enough to change their habits, but they probably won't.

As an aside, I was the lowest paid person in that room. (By my own choice. I choose time over money when practical.) And yet I probably had the highest net value of everyone there. I don't particularly care about the value of my "stuff" but if I were to play by their rules, I own 5 houses, have a net worth closing in on 7 figures and my car cost more than my parents paid for their current home. I will be a millionaire by the time I'm 40 and I plan to retire by 50, which was younger than at least a couple people in the room. I am not a slave to money or things like they are. I actually feel sorry for them.

I bought my wife a house and a car a couple months ago. And we just spent a couple hundred dollars on things I would consider unnecessary to decorate this new house. That alone is enough of a decent into materialism for me.

Posted by Clinton at 9:28 AM No comments: