When I was 18 a friend bought me a journal for Christmas. I didn't really know what to do with it. Journal in it I guess. I wasn't a journaller. I didn't keep a diary, outside a few school assignments when I was 13 and 16, but I had to hand those in to my teacher. So, I started writing in my journal. I wasn't really sure what to write about. Stuff, I suppose.

It started out mostly about the daily events happening in my life. That got boring. Eventually I started writing my thoughts about those events. I started writing about what things meant and why I thought people did or said the things I wrote about. And then I started writing about my thoughts, separate from the events in my life. And almost daily I wrote in my journal. I became obsessive. Sometimes I would write 5 or more entries a day. Even if I went away on vacation I would bring it along. I would rarely go for longer than a week without writing in it, and that was only if I was physically separated from my journal. I documented everything. If something happened in my life that I wanted to share, I didn't share it with my family or friends. I wrote it in my journal. It almost became like a confident to me.

I haven't written in my journal for over a month now. I've been busy, but that's never stopped me before.

I wonder what this means.

Dropping Truth Bombs on the Fortress of Pretty Little Lies

A while ago I posted some dialogue from the movie The Matrix.

Here's a couple of videos to bring you up to speed.

The Red Pill and the Blue Pill represent reality and fantasy respectively.
Or maybe it's more accurate to say reality and un-reality. 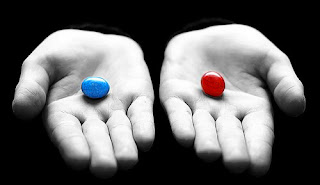 I don't believe that the world we live in is a computer simulation like in The Matrix, but I do believe how we perceive the world can create false realities just like the Matrix. It's been said that perception is reality. The truth however, is that perception is a viewpoint of reality. Reality is truth. Our perceptions can shade the truth, selectively  see part of the truth or ignore the truth completely. Two different people can see reality and walk away with completely ideas of what they just saw. And to each of them that was the truth. That is the power of perception.

Morpheus offered Neo a choice. The Blue Pill would allow him to see reality with the same perception he always had. That Perception was blind to the truth, but the un-reality that Neo knew was the only truth Neo knew. The Red Pill would allow him to see reality as it actually was. No tricks of perception. No philosophies, ideologies, pre-conceived ideas, biases or omissions. Just unfiltered truth.

Have you ever had a sense that something you "knew" wasn't quite right? I have. What if what you thought you knew was completely wrong? About 8 months ago I stumbled on to something that I didn't believe was reality. My perception was challenged. Everything I thought I knew about something was wrong. I was living in the Matrix. I was living in an unreality created by my perception. At first I couldn't accept what I was hearing and seeing. I had heard people talk about these ideas before, derisively. They would only mention them to knock them down or point out how wrong they were. And yet, there was something in those ideas that seemed to reflect reality. It was like I knew it was the truth, but I chose to believe the lie my perception presented, even when I suspected it was a lie. However, eight months ago, I I took the red pill. I discovered the reality that had been hidden from me my whole life. I had believed a lie propagated by virtually everyone in my life, and yet I could sense it wasn't right. (I even suspect some of them doubt the "truth" they were peddling, but wanted it to be the truth so badly they chose to ignore reality. They chose the blue pill.)

It's not that the Matrix is a bad thing. In some ways its un-reality was better than the real thing. The only strike against it, was that it wasn't the truth. The Matrix I have escaped from wasn't bad. It could be quite good if you are willing to be a slave to its lie. But the truth, however more harsh, is more real and offers more satisfaction and opportunity as well as more pain and suffering. Some people discover the truth and decide to go back to the Matrix because they like it more, even though its not real and they know it. I can understand the reason for those people's decision, but I can't accept a lie substituted for the truth any more.


Looking back on it now, I can see reality screaming at me, "Wake up! You are in the Matrix!" It's only after I've escaped do I understand everything I heard and sensed at the time. Living in the Matrix, those truths were changed to fit the lie instead of the other way around. Now that I know the truth it all makes sense.

I know I've said a lot without really saying anything. There has been a common idea floating through many of my blog posts the last 8 months or so. This post is the first of many trying to explain what I have discovered. There will be more.

Posted by Clinton at 1:32 AM No comments: